← Who WIll Watch "Before Watchmen"?
Avengers Assemble! →

Comic Reviews: Conan The Barbarian and Kirkman’s Thief of Thieves! 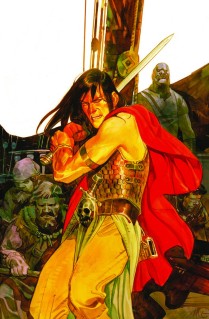 Dark Horse is once again releasing a new series based on Robert E. Howard’s most famous creation, Conan The Barbarian. Keeping in line with their mandate of presenting Conan’s stories in chronological order, the new series, titled Conan The Barbarian (simple enough), now tracks the barbarian’s time as a pirate along the Black Coast of Argo. Adapted from Howard’s original story “The Queen Of The Black Coast”, the story starts off like a typical Conan yarn, albeit with two aces in the hole: writer Brian Wood and artist Becky Cloonan.

From the opening panels, I knew that my excitement for this series was going to be met. Wood’s characterization of Conan is fantastic, which is no surprise seeing as how he wrote the phenomenal viking series Northlanders for Vertigo. This is may be a younger Conan, but he has traveled the world enough to be a formidable foe. He’s cocky, brash, but still wise enough to realize when he screws up, which is evident when he first jumps aboard The Argus and tells the crew about the events that led him to climb onto their ship and demand passage. After winning the crewmen over, Conan is allowed to stay onboard with the men, as long as he provides them with protection from the pirates that sail the seas, which includes the legendary Belit, the pirate “Queen of the Black Coast”. Even though Conan knows she’s dangerous, there’s something about her that draws him in.

If Wood’s writing for this issue is the cake, then Becky Cloonan’s amazing panels is the icing on the cake. Her art in this series is gorgeous.  I wasn’t entirely sure how well her style would fit with the world of Conan, but I am more than pleased with what we’ve got. Her style is packed with fluidity, which is exemplified in the action that starts off the issue, and her style more than sets the mood for the story.  The Black Queen is stunning and dark, while Conan is depicted as a small but powerful figure. With this issue, Cloonan proves she’s one of the top artists in the business, and needs to be given any book she wants.

Conan The Barbarian is a great starting point for new readers, and it seems to be a solid continuation of the Dark Horse Conan series that came before it. With this, Wood and Cloonan are starting a 25 issue epic that looks to be an amazing depiction of Robert E. Howard’s world, and by Crom, I am on board. 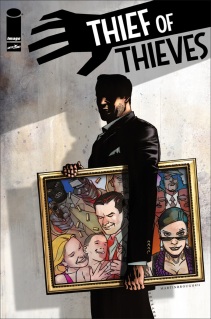 Robert Kirkman has become such a titan of the industry that he doesn’t need to even script his comic books anymore. In all seriousness, Thief Of Thieves is the newest title under Kirkman’s Skybound imprint at Image, plotted by Kirkman with a script by Nick Spencer (writer of Morning Glories).  Following the life of Conrad Paulson, a master thief who goes by Redmond, the series takes its time introducing us to the characters and their relationships with our main character. We see a hit go down, some background info on Paulson and his assistant, but in all honesty, I can’t really recommend this guy based on this issue alone. The seeds have been sowed for something great here, but there’s nothing that really jumped out at me in this issue and makes me go “man I gotta read the next one”. If anything, it made me say “this will make an awesome trade”. I really enjoyed Paulson teaching his protege how to successfully steal a car, and the art by Shawn Martinbrough is really well done. Unfortunately there just wasn’t enough here for me to keep getting the single issues, although I’ll most likely pick up the trade when it’s released.

Posted on February 8, 2012, in Uncategorized. Bookmark the permalink. Leave a comment.

← Who WIll Watch "Before Watchmen"?
Avengers Assemble! →