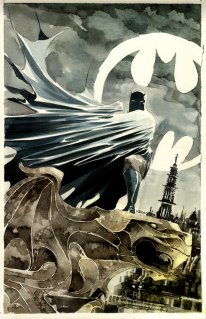 Like most of you, I picked up a lot of graphic novels and hardcovers last month during Jetpack’s insane Christmas sales. They are now overtaking my bedroom in stacks, and I’ve just realized that I have no shelf space for any of them. Of the plethora of collections, I was able to snag the entire run of Paul Dini and artist Dustin Nguyen’s Batman: Streets Of Gotham series in hardcover. I’m a huge fan of writer Paul Dini, mainly because of his and Bruce Timm’s involvement with the immortal Batman: The Animated Series. My love for that series guarantees that I will give anything Dini writes a shot. For my money, he’s one of the best writers of the denizens of Gotham City.

Despite this, Streets Of Gotham was a series that I never picked up. Released following the events of the “Battle For The Cowl” storyline, it was unfortunately placed in a pile of books that included Red Robin and Gotham City Sirens, marked with a big fat “unessential” sign above them. Well, I’ve the heard that buzz around SOG and Red Robin was pretty solid (I haven’t given Sirens a chance yet, but my love of Harley Quinn means I’ll check it out eventually), and after hearing that Dini was doing awesome things with Hush in SOG, I made it a point to pick up the hard covers.

The crux of the series picks up after two events: the “Battle for the Cowl” and the “Heart Of Hush” storyline. The former is obvious mainly because the Dark Knight in this series is Dick Grayson and Robin is Damien, while the latter is the starting point for the main storyline of the entire series: Thomas Elliot, aka Hush, has performed plastic surgery on himself to become the exact double of Bruce Wayne. Knowing that Wayne has gone missing and is presumed dead, Elliot decides to get revenge on him the only way he can: by spending all of his money. However, after he’s caught in South America by Catwoman (who’s pissed that Hush removed her heart in “Heart of Hush”) and Dick and Damien, Elliot is then kept under control by Bruce’s allies and used to make the Gotham public think that Wayne is still alive. 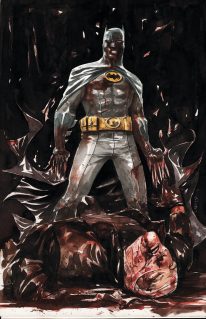 You might be thinking, “that’s a cool idea, but how does it stretch out to 3 hard covers?” Well, therein lies the one catch with Streets Of Gotham: it’s pretty uneven. Whenever the story focuses on Hush and his plans to ruin the Wayne Foundation, it’s fantastic. But, when the story veers off and features new villains, it becomes boring pretty quick. Much of this is in the second collection, Leviathan. The first, Hush Money, focuses primarily on Hush and features the return of notable villains like Firefly and Mr. Zasz. In fact, this series featured many of the things I wanted to see in Batman after Grayson become the Bat: him facing off with well-known bat-villains. Aside from the Judd Winick storyline with Two-Face, Dick Grayson primarily fought new villains. I understand the “new Batman needs new villains” angle, but there are so many great Bat-villains that I really wanted to see Grayson face off with some of them.

As I said before, the second volume, Leviathan, is an unfortunate misfire. Dini doesn’t write many of the storylines in that volume, but he did supply the story for them. Leviathan takes some strange detours, including the introduction of a new vigilante named Abuse, who has a kind of cool Luke Cage vibe to him. The storyline behind Mr. Zasz abducting homeless children for fights to the death is pretty cool too, but isn’t given enough time to breathe as one would hope for. 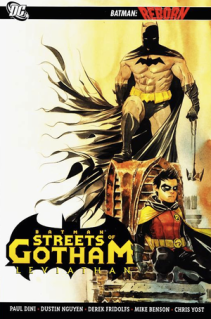 The third volume, The House Of Hush, starts off with a whimper, but quickly gains steam once the Hush-centric final story begins. The whimper takes the form of a two-parter that features The Carpenter, a really, really stupid character that creates hideouts for different villains in Gotham. I’m sure she could be interesting, but this story doesn’t do her any favors. However, that’s quickly over, and we get even more awesome back-story on Thomas Elliot and his families connection to the Waynes. House Of Hush shows us how Thomas Wayne met Martha, and the turn of events that cause the Elliot family to fall apart as the Wayne family is just beginning. The tale is juxtaposed against Elliot teaming with a paroled elderly gangster who is looking to kill Bruce Wayne as revenge against his parents sending him to prison. Elliot, who is originally kidnapped by the gangster because of his “resemblance” to Wayne, quickly joins forces once he learns that Wayne has returned as Batman.

The return of Bruce Wayne is handled pretty differently in Streets of Gotham than in other books. And by differently, I mean that Bruce just shows up. The only reaction we get is from Catwoman, and while it’s a good one, I would’ve liked to see more interaction between Bruce and Dick in this title. Despite this, Streets Of Gotham is worth your time and money, especially if you are a fan of Hush, arguably the best new Batman villain of the past decade.

Posted on January 17, 2012, in Uncategorized. Bookmark the permalink. Leave a comment.