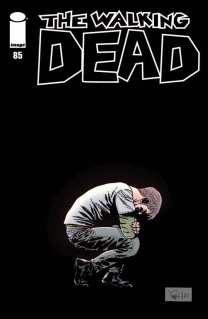 As always, the newest issue of Walking Dead is a winner. However, unlike the previous two jaw-droppers, issue 85 is another slow burner, with the quiet character moments that we have come to expect from Kirkman’s series.

In the aftermath of “No Way Out”, Rick has become the new leader of the community, which has just suffered numerous losses at the hands of a zombie attack. One of the casualties being SPOILER his son Carl, who has shot in the head by rogue gunfire. This issue finds Rick staying by his son’s bedside as the other members of the community clean up the damage left by the zombies. Later on, we get a great moment in which Rick explains his new found outlook on life to the other members, and starts to initiate a change that may or may not lead to fruition. We also get some stunning insight into Abraham, and his recent infidelity issue. The issue ends as always with a cliffhanger regarding the young Carl.

Once again Kirman’s ability to make believable characters is showcased, and while there isn’t a whole lot of zombie goodness for Charlie Adlard to draw, he shines in the slow-character based moments as well. For the trade waiters, you can pick up this issue after the upcoming No Way Out trade. I can’t recommend doing this enough, as you will never have to worry about spoilers ever again. While it’s not a slam bang zombie killing issue, Walking Dead #85 more than delivers in the character moments, and sets up some intriguing plans for the future. 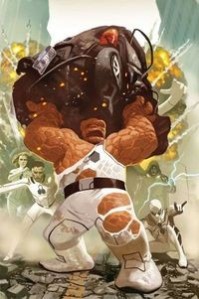 Marvel is certainly cranking out FF. Issue 3 came out a scant two weeks ago, and we’ve already gotten the next installment of  Jonathan Hickman stunning book. This issue finds Reed and Valeria discussing how best to terminate the threat of the evil alternate universe Reed Richards’ (yes there’s more than one), and Sue Storm and Spider-man answer a call from some Atlanteans in distress, which quickly turns ugly once Mole Man and one of the evil Reeds show up (especially since Sue has no idea why the real Reed is holding a meeting at their home). FF #4 is another exciting chapter in the continuing FF saga, and I cannot wait for the next issue.

Posted on May 25, 2011, in Uncategorized. Bookmark the permalink. Leave a comment.