This week I’ve got some strange comics up for review. It was a slow week this week for releases, so I grabbed one comic that I haven’t read in awhile, and one that I’ve loved so far, but unfortunately this issue wasn’t up to snuff.
COMIC REVIEWS!!!! 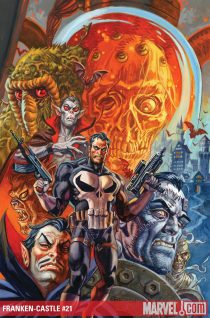 First off, Franken-Castle is indeed The Punisher series renamed. After the events of last year’s extremely bloody (and extremely AWESOME) “Punisher: The List” one-shot, Frank Castle was killed by Wolverine’s son Daken , but was soon resurrected by the likes of Morbius, Werewolf By Night, and other Marvel monsters as a Frankenstein-like creature in order to protect them from a monster hunting madman. This of course caused numerous Punisher fans to throw a shit fit, but I myself embraced this concept because of its amazing silliness, and the fact that an idea as ridiculous as this was ever allowed to see print (I would love for the inevitable hardcover release to include footage of writer Rick Remender’s pitch to the Marvel editors). For once, I was actually interested in the Punisher enough to pick up his series, even if it was for only a few issues.
However, nothing new ever really sticks in comics, and the newest issue of Franken-Castle is a testament to that. In fact, Castle is only the monster for the first few pages, and is somehow returned to his normal look due to the use of the bloodstone, a mystical artifact that Frank has been using to fight monsters and up his power level.
After the quick change, the monsters go to Frank to try and get the bloodstone back, and Frank starts fighting them. Then the Mummy tells him the bloodstone is corrupting his view of who needs to be “punished”, and Frank rips it out of his chest and returns to New York City. And I’m totally aware that I just wrote that.
I may pick up the next Punisher mini-series if only to see if it gives me any insight into this part of Frank Castle’s history, but I doubt it will. While it was completely silly, at least this whole “Franken-Castle” thing was original, as opposed to another story where Frank kills some gang member/rapist/drug dealer. 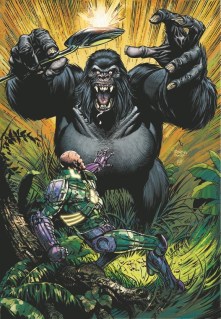 Action Comics # 893
It figures that the issue of Action Comics that I decide to review for this installment would also be the weakest installment of the “Black Ring” storyline. A few issues back, this Man of Steel title switched gears and started focusing on Lex Luthor and his quest to find a Black Lantern ring. While I still don’t know why he wants a black ring when he was using an orange one in Blackest Night, writer Paul Cornell has crafted a really entertaining story, as well as shining a new light on one of comics’ greatest villains, especially considering his android “assistant”.
That being said, the newest issue was fairly weak. Lex is traveling through Uganda searching for the energy source of the Black Lantern Corps. While there, he comes across Gorilla Grodd, who is quite possibly the dumbest villain I’ve ever seen. At one point, he attacks Lex with a giant spoon, in order to eat his brains. Again, I’m well aware that I just wrote that.
While this wasn’t the strongest issue of Action Comics, it at least served the plot, and the next issue looks to be a whole lot more promising, and may even turn out to be an even bigger game changer for not only DC, but its Vertigo imprint as well. Whether you’re a Superman die-hard, casual fan of Kal-El, or enjoy seeing Lex Luthor fighting other DC villains, you’re bound to find something to enjoy in this series, and you should pick this up, regardless of this lackluster issue.

On a sadder note, comedian Greg Giraldo died today. I really enjoyed his stuff on the various Comedy Central roasts, as well as when he was on the short-lived Tough Crowd With Colin Quinn. RIP Greg, you will be missed. 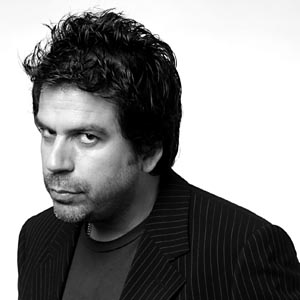