Wow, today has been interesting so far. I got my paycheck a day early from Jetpack, but on the way home my car stalled….in the middle of the road. I got it up and running after a few tries (and a quick 911 call), and it seems okay now, I just really hope it’s not something major, as I don’t want to be already having to pay for car repairs after just starting at Staples.
Speaking of that office retail giant,  Staples isn’t too bad. Granted I’ve only been there for three days, but it seems like a pretty good place to work, and it isn’t too stressful, which is much appreciated. I’m also possibly/probably/most definitely going to pick up a Playstation 3 tonight. I’ve broken down thanks to Best Buy’s really great offer and their seemingly excellent Reward Zone Mastercard, which offers no interest for 18 months, provided that you pay off the card completely within that time. I guess I’m now an “adult”, as I really need to build up some credit (not counting that awful Discover card I’ve had since my Freshman year of college)
But now, ON TO THE COMIC REVIEWS! 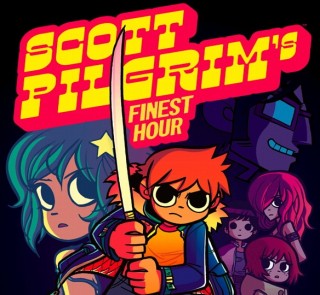 HERE THERE BE SPOILERS!
Today marks the release of the sixth and final volume of Bryan Lee O’Malley’s Scott Pilgrim series. You may be thinking to yourself “hey, isn’t that that movie with Michael Cera that’s coming out next month?” Well it is. And it’s going to be awesome, despite what the Cera haters say.
Anyways, before Mr. Pilgrim’s adventures were being prepped for the big screen, they were a series of graphic novels by author/artist Bryan Lee O’Malley, all of which are well worth the money and are some of the finest works of comic book storytelling I have ever seen. This series is one that you give to people who are either trying to get into comics, or believe that comics are not “appropriate” forms of storytelling. O’Malley’s use of the graphic novel format is integral to this story’s success, and I really hope that Edgar Wright’s upcoming movie can capture that on the big screen.
In “Scott Pilgrim’s Finest Hour”, we finally see Scott tackle Gideon Graves, the final “evil ex-boyfriend” of Ramona Flowers. The problem is that Ramona has gone missing for the past year, leaving Scott an emotional wreck at the beginning of our story. Ignoring his friends, Scott instead finds solace in playing video games non-stop, until his roommate Wallace tells him to just “go have sex with somebody”.
What ensues is Scott awkwardly attempting to hook up with some of his own exes, while also trying to prevent himself from becoming an “evil ex-boyfriend” himself. After struggling with “Negascott”, his evil clone, he realizes that he still loves Ramona and must fight Gideon to win her back. The problem is that Ramona isn’t with Gideon either. I’m not going to go into details for those who are still catching up on the series, but the final fifty plus pages are amazing works of comic art, and the action comes fast and furious. One of my favorite aspects of the Scott Pilgrim series is the many videogame shout outs that are given to the reader, and this volume has those in spades. The ending is exactly what fans of this series would want, and Mr. O’Malley offers a very poignant look at young love and what it means to grow up even though you don’t want to change. Ramona’s reasons for her actions are finally revealed, and she is, by far, the best character of this series. While it is bittersweet to see Scott Pilgrim come to an end, I’m pleased to report that it ends on a high note, and I’m sure Bryan Lee O’Malley has a very bright future ahead of him.